Sussman in managing editor Howard Simons's office in 1973. Simons was the main force behind the Washington Post's Watergate coverage.

Barry Sussman was city news editor at The Washington Post at the time of the Watergate break-in. He directed the coverage that won the 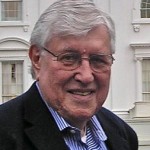 Post the Pulitzer prize for public service in 1973. His book, The Great Coverup: Nixon and the Scandal of Watergate, was named by the New York Times as one of the best books of the year in 1974; it is now a Watergate classic in its fourth edition, available in print and ebook versions. Sussman was named editor of the year by the Washington-Baltimore Newspaper Guild for his work on Watergate, the only time such an award was ever issued. Aside from the book, he has written and lectured widely on Watergate.

He is also the author of What Americans Really Think, published by Pantheon in 1988, based on columns he wrote while a pollster and public opinion analyst at the Washington Post, and Maverick, A Life in Politics, written with and about the former U.S. Senator and governor of Connecticut, Lowell P. Weicker, Jr., published in 1995 by Little, Brown.

From 2003 to 2012 Sussman was editor of the Watchdog Project of the Nieman Foundation for Journalism at Harvard University where he edited a website, niemanwatchdog.org, which was aimed at improving news reporting on public policy issues.

Sussman is one of a small number of journalists profiled and interviewed in Investigating Power: Moments of Truth, an online tribute to some who covered some of the most important events in American history since World War II.

Sussman started in journalism in 1960 as a reporter at the Bristol (Va.-Tenn.) Herald Courier, a daily with a circulation of about 25,000. He left after 16 months but soon returned as managing editor before going to the Washington Post in 1965. He was a state-suburban editor, then DC editor, with a staff of 40 to 45 reporters and, after Watergate, he founded the Washington Post poll, designing and conducting opinion surveys and reporting on the results. In 1981 he was in charge for the Post in establishing and directing the Washington Post/ABC News poll, again designing surveys and doing most of the reporting on the findings. Sussman left the Post in 1987 to become managing editor for national news at United Press International, in charge of 800 reporters and editors across the U.S. and 40 more in UPI’s Washington Bureau. He left UPI after less than one year, however, and set up shop as an independent pollster, continuing to focus on public policy issues. Clients included trade associations, the AFL-CIO, and other interest groups. In the 1990s he became active as an international news media consultant, with assignments at newspapers in Spain, Portugal and seven Latin American countries. Currently he is a board member of the group Innovation Media Consulting.

In 2011 Sussman was the recipient of a lifetime achievement award from Brooklyn College, his alma mater.