THE GREAT COVERUP : Why It’s Special

No American history, government, or journalism collection is complete without The Great Coverup: Nixon and the Scandal of Watergate, by Barry Sussman, the best account of the fall of Richard Nixon. It is a dramatic report, by an insider, on the political crime of the century as it was happening.

The Great Coverup was named one of the best books of the year by the New York Times and the Washington Post when first published. Wrote David Halberstam in his book The Powers That Be: “From the start, the Post was thus unusually lucky. It had the perfect working editor at exactly the right level.”

A key Nixon goal was to limit the Watergate investigation to the break-in alone, making it appear to be little more than politics as usual. To a great extent he succeeded — then and now. For while Watergate has come to mean scandal at the highest levels, few know what it really entailed beyond a bungled burglary.

As Sussman, who was the Washington Post’s special Watergate editor, spells out:

Under Nixon the CIA had been dragged into domestic affairs; the investigation and findings of the FBI had been subverted; the Justice Department had engaged in malicious prosecutions of some people and failed to act in instances where it should have; the Internal Revenue Service had been used to punish the President’s alleged enemies while ignoring transgressions by his friends and by the President himself; the purity of the court system had been violated; congressmen had been seduced to prevent an inquiry into campaign activities before the election; extortion on a massive scale had been practiced in the soliciting of illegal contributions from the nation’s great corporations; the President had secretly engaged in acts of war against a foreign country… and agents of the President were known to have engaged in continued illegal activities for base political ends. If there was a “politics as usual” aspect to Watergate, Sussman writes in The Great Coverup, it was in the help Nixon got from members of both political parties. Therein lies one of the book’s many lessons: Watergate would have been brought to a close much sooner except for the help powerful men on Capitol Hill extended to their President.

In their book, Woodward and Bernstein said Sussman, “given prime responsibility for directing the Post’s Watergate coverage…had the ability to seize facts and lock them in his memory, where they remained poised for instant recall. More than any other editor at the Post, or Bernstein and Woodward, Sussman became a walking compendium of Watergate knowledge…On deadline he would pump these facts into a story in a constant infusion, working up a body of significant facts to support what otherwise seemed like the weakest of revelations. In Sussman’s mind, everything fitted. Watergate was a puzzle and he was a collector of the pieces.” 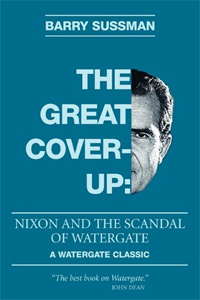 Paperback or eBook available from: