WILL THERE BE PUNISHMENT FOR A LYING EX-PRESIDENT?

By Barry Sussman Posted in - Watergate at 50 & Watergate scandal & Donald Trump & Uncategorized on May 5th, 2022 0 Comments 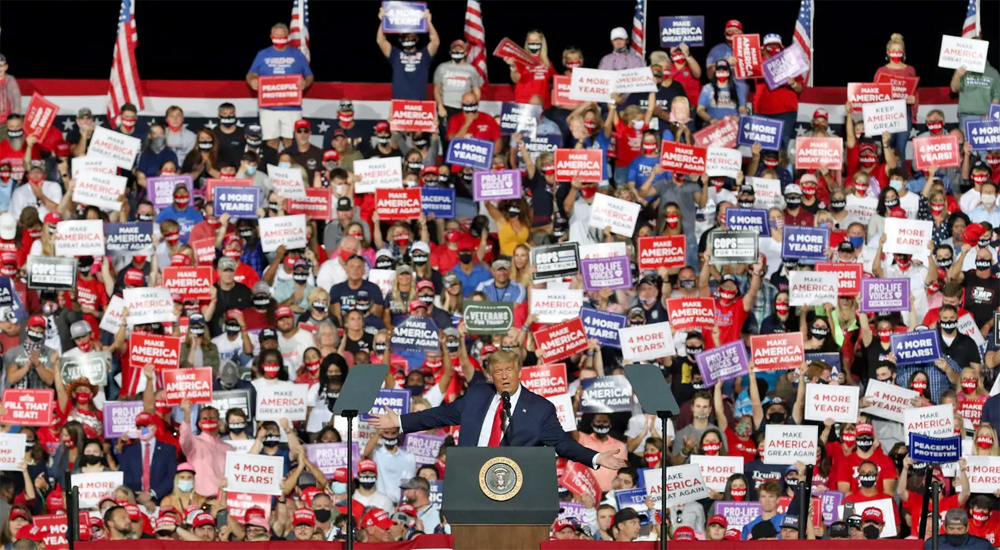 Herblock, the late Washington Post political cartoonist and nemesis of Richard Nixon, wrote in a 1974 book, Herblock Special Report, that Nixon had a “Multiple Bad Things Advantage.” That is, there were so many bad things spewing from his mouth that critics didn’t know where to begin. “In a single speech,” Herblock wrote, “there were often many statements that cried out for separate cartoons. And the scandals pushed aside other events, foreign and domestic, that would otherwise have deserved the space. Even the scandals tumbled out in such profusion that th­­­­­­­ey couldn’t be covered adequately.”­­­

As president, Donald Trump far outdid Nixon in use of the multiple bad things advantage. He did it day after day so that not only cartoonists but the press at large, Congress, and all the political scientists in all the universities had no chance of keepin­­­­­­­­­­­­­­­­­­­­­g up with him. The best anyone could do was to attempt to count the lies, a job taken on by the fact checker at the Washington Post, who determined that Trump was guilty of thirty thousand, three hundred and three lies or misstatements while president.

After his defeat by Biden, Trump claimed he had won but that the election was stolen from him. This was widely called “the big lie” – but Trump began saying the big lie was the statement that Biden had won. That was a basic part of his multiple bad things system: to turn attacks on him into attacks on critics or opponents. Then, when observers tried to set Trump’s lies straight, he would change the subject, often switching to some other false claim – for example that he was not getting due credit for saving millions of lives in the Covid-19 pandemic when, in reality, he may have been personally responsible for many thousands of deaths. The fact checkers had to hire assistants to even begin dealing with Trump’s lies.

A recent “change-the-subject” example: On March 28th a federal judge said it was more likely than not that Trump had committed crimes in connection with the January 6th, 2021, insurrection. A day later it was reported that more than seven hours of his phone call logs for January 6th were missing. Both those items put Trump in a very bad light. How did he respond? He called on Vladimir Putin to release dirt on Hunter Biden.

As I watched one of his speeches, his last state of the union on February 4th, 2020, I was astounded at the amount of junk Trump could cram into a talk – yet some of it clearly had a broad populist appeal, regardless of the facts. Trump lied, was misleading and rattled off dozens of half-truths. He told tall tales about the economy, said our borders were now secure, that we had a prosperous, inclusive society, that his administration was pro-worker, had a pro-family agenda, took credit for food stamp and welfare reductions, touted so-called Opportunity zones, said he had restored America as a manufacturing hub, said only he could manage trade with China, boasted that he had reversed Obamacare and distanced the U.S. from Cuba, said we now had the highest military budget ever and were militarizing space. He referred to public schools as government schools, plugged so-called “opportunity schools,” said four hundred companies were providing fifteen million jobs and educational opportunities, claimed that he had improved health insurance plans and reduced premiums by sixty percent, was protecting patients who had pre-existing conditions, was also protecting Medicare and Social Security; said, in effect, that single-payer health insurance would bankrupt America, said five hundred miles of the wall with Mexico were completed, that his administration was “taking on the big pharmaceutical companies,” that we were curbing the opioid epidemic, that he had provided high-quality child care, that he was having the U.S. join an international “trillion tree” planting plan, said (not for the first time in one of his State of the Union talks) that we had to rebuild the infrastructure, that every citizen should have high-speed internet access. He wanted to sue sanctuary cities, have people pray in public schools, fight what he called “a siege” on the Second Amendment, help Iran’s economy recover(?!?), bring the troops home from Afghanistan. He referred to the “beautiful, beautiful Alamo,” which made me wonder if he ever had been there, said that Rush Limbaugh was a great American, and so on. 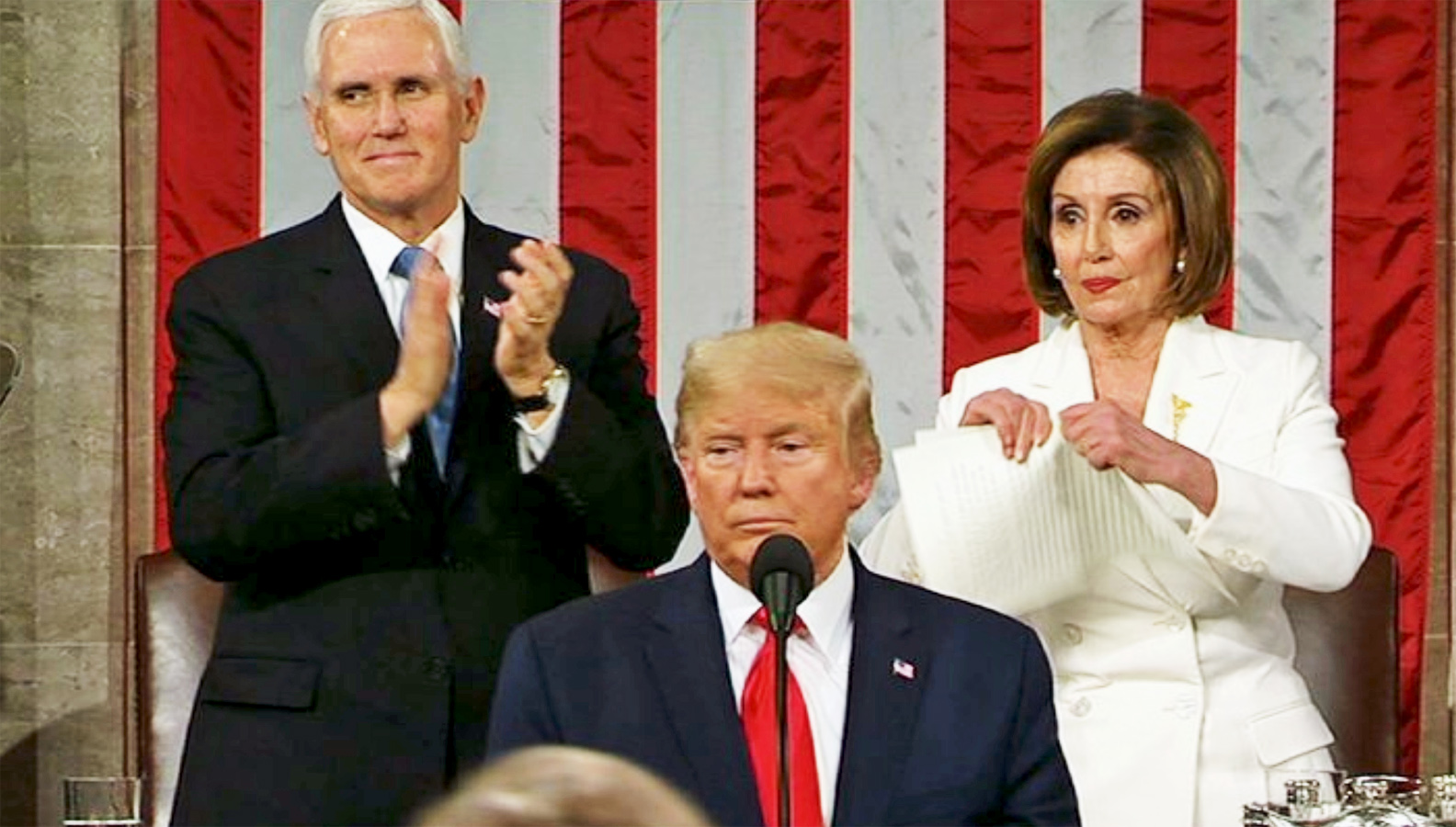 PELOSI AS EDITOR
Speaker Nancy Pelosi tears her copy of President Donald Trump’s State of the Union address after he delivered it to a joint session of Congress on February 4, 2020. (AP photo)

How was the press supposed to deal with that? Speaker of the House Nancy Pelosi had the right idea at that state of the union. As Trump finished, she stood up and tore her copy of his speech in two.

Trump’s lies, belligerence, massive ego, crudeness, unfitness for the presidency and other deficiencies were only part of the problem, for he also gave the appearance of being a mobster, sex offender and grifter. So a main question as I write this in 2022, is: How does the criminal justice system deal with Trump?

Do the Democrats, the soft party, let bygones be bygones as Leon Jaworski and Gerald Ford did for Nixon, and as Barack Obama did for George W. Bush, Richard Cheney and Donald Rumsfeld, or will there be serious investigations and prosecution of him and his abettors? And possibly thereby a step toward restoring democracy? Will prosecutors indict Trump for any offenses, including the January 6, 2021, attack on democracy, or just let things slide, and hang the accountability?

That Trump should be prosecuted for something or other seems clear. But what exactly? As a candidate he started by showing contempt for the law and as president he never stopped. A president’s constitutional obligation to “take care that the laws be faithfully executed” was a concept foreign to him. He encouraged supporters at campaign rallies to punch out dissenters (said he would pay the bill), called for police and military throttling of protesters of racial injustice, incited violence so repeatedly that under him normal events of daily life – transactions at stores, dining in restaurants, public transportation, health care (vaccinations, for example, or wearing of masks because of the Covid-19 coronavirus pandemic), workplace situations, almost all interactions – were marred by incidents of grossness, hostility and violence.

Hate crimes soared. Blacks, Muslims, Jews, Asians all became targets to an extent previously unseen in modern America. White supremacist groups, encouraged by Trump, set up shop on the internet and rose up in dozens of cities. Trump was as responsible for all this as any individual could be. He also seemed surely guilty of criminal fraud in paying hush money to two women before the 2016 election to hide sexual affairs with them. And, like Nixon only more so, Trump paid nothing or next to nothing in personal income taxes year after year, including while president, and was being investigated for major tax fraud in his businesses.

The concern over prosecuting Trump is not easily resolved. On the one hand, putting him on trial would cause an uproar and possibly considerable violence. The country might not be able to withstand having him in the dock for one or more lengthy criminal trials. On the other hand, failure to hold him and his major abettors accountable could be worse; it could set back the rule of law in America for generations.

People often look for comparisons between Nixon and Trump. One of the main ones was their criminal behavior. As I describe in my Watergate book, The Great Coverup, some of Nixon’s activities could be looked at as isolated incidents, not substantial enough to prosecute. When strung side by side they formed a clear pattern, a repeated obstruction of justice, a criminal presidency. With Trump there was no need to look for a pattern. The individual incidents were bolder and more frequent; the pattern jumped out on its own.

Trump’s legal situation after he left office was different from Nixon’s. In early 1974 Leon Jaworski made the decision, unannounced, to list Nixon as an unindicted co-conspirator in the Watergate scandal. By early August that year Nixon knew he would be impeached, so he resigned. Then Ford issued the pardon and that was that, fait accompli. There was almost no news media run-up. In issuing the pardon, Ford’s stated rationale was that he was bringing a national nightmare to an end and that any prosecution of Nixon would worsen divisions in an already divided country.

With Trump, indicting him was on some people’s minds from the moment he became president. The idea gained ground when he lost the 2020 election and challenged the result in more and more demented ways as months passed. It wasn’t as though the election was close, so that a reversal in one or two states would put him ahead of Biden. He was substantially far behind. Still, Trump made it clear he would do anything he could – anything at all – to stay in office.

By mid-December 2020, after Biden had been confirmed as president-elect by the Electoral College, Trump continued trying to block him. Trump’s lawyers lost sixty or so court cases, often getting smacked down by jurists, even Trump-appointed ones, for wasting the court’s time with empty claims. As possibilities narrowed, Trump put his hopes in a suit filed directly with the Supreme Court by the Texas attorney general. It was signed onto by sixteen Republican attorneys general in other states and one hundred twenty-six Republicans in the House of Representatives.

It was hard to understand exactly how Trump thought the result could be reversed, yet there he was, acting as though his life depended on it. And that – fear for his life – was to me the most reasonable explanation for his driven, reckless behavior. My guess was that Trump felt that once he was a private citizen he would become a defendant in one or more criminal cases. Trump’s former attorney Michael Cohen got a three-year prison sentence for the hush money paid the two women before the 2016 election. Trump was the boss in that crime; reasonable people would almost surely see that at a trial and convict him. In addition:

That looks like the record of someone who cannot stop cheating, lying, and breaking the law. So a fair question regarding punishment, not to put too fine a point on it, might be: What shall we do with a lying ex-president?

Next: In conclusion – A look ahead: Is democracy done for?