George W. Bush was not elected president in the year 2000; he was appointed in a Supreme Court coup and things went downhill from there. Aside from Donald Trump, no president in modern times seemed less suited for the job. Bush had advantages in life reserved for a small elite but he constantly abused them. He was arrested for drunk driving in 1976, which was unreported in the presidential campaign until a few days before the election. He avoided the war in Vietnam by joining the Texas Air National Guard and then spurned obligations to the Guard. Had Bush been a Democrat, his political and personal life would have been torn to pieces by Republicans, and, I believe, examined more thoroughly by the press.

America will be paying far into the future for the damage Bush, vice president Richard Cheney and defense secretary Donald Rumsfeld caused. On false pretenses – claims that Iraq had weapons of mass destruction – they brought the U.S. into war against Iraq, one of the longest wars the country has ever seen. It cost almost five thousand American lives, half a million or more Iraqis killed and millions of them displaced.

There has been no satisfactory explanation for the Iraq war. Not only that, but if just possibly Bush had a good motive for the invasion in March 2003, it was clear not long afterward that there was no reason to stay, and he should have pulled out, as many were demanding. So one of the worst things Bush did as president was to invade Iraq, and another was to continue fighting there.

In their conduct of the war, Bush, Cheney and Rumsfeld approved of ghastly actions against Iraqis that may have instilled hate of America for generations. Just the words – Abu Ghraib prison – are hurtful. Spending on the war was in the trillions of dollars and is still continuing because of veterans’ need for health care, including for treatment as victims of the opioid epidemic, among other issues. As early as 2006 distinguished economists were saying the war until then had cost two trillion dollars. Later assessments were sometimes double that.

Iraq was only one of Bush’s bad decisions. The list is long. Before nine/eleven he failed to heed warnings from American intelligence about Osama bin Laden and terrorism. He responded more like a wise guy than a president.

As for the economy, Bush implemented tax cuts in 2001 and 2003 that gave a little money to most people but were a boondoggle for the very rich. The cuts were supposed to pay for themselves, Bush and his supporters said, but they ended up substantially decreasing tax revenues and adding a trillion and a half dollars to the national debt over a decade, according to the Congressional Budget Office. 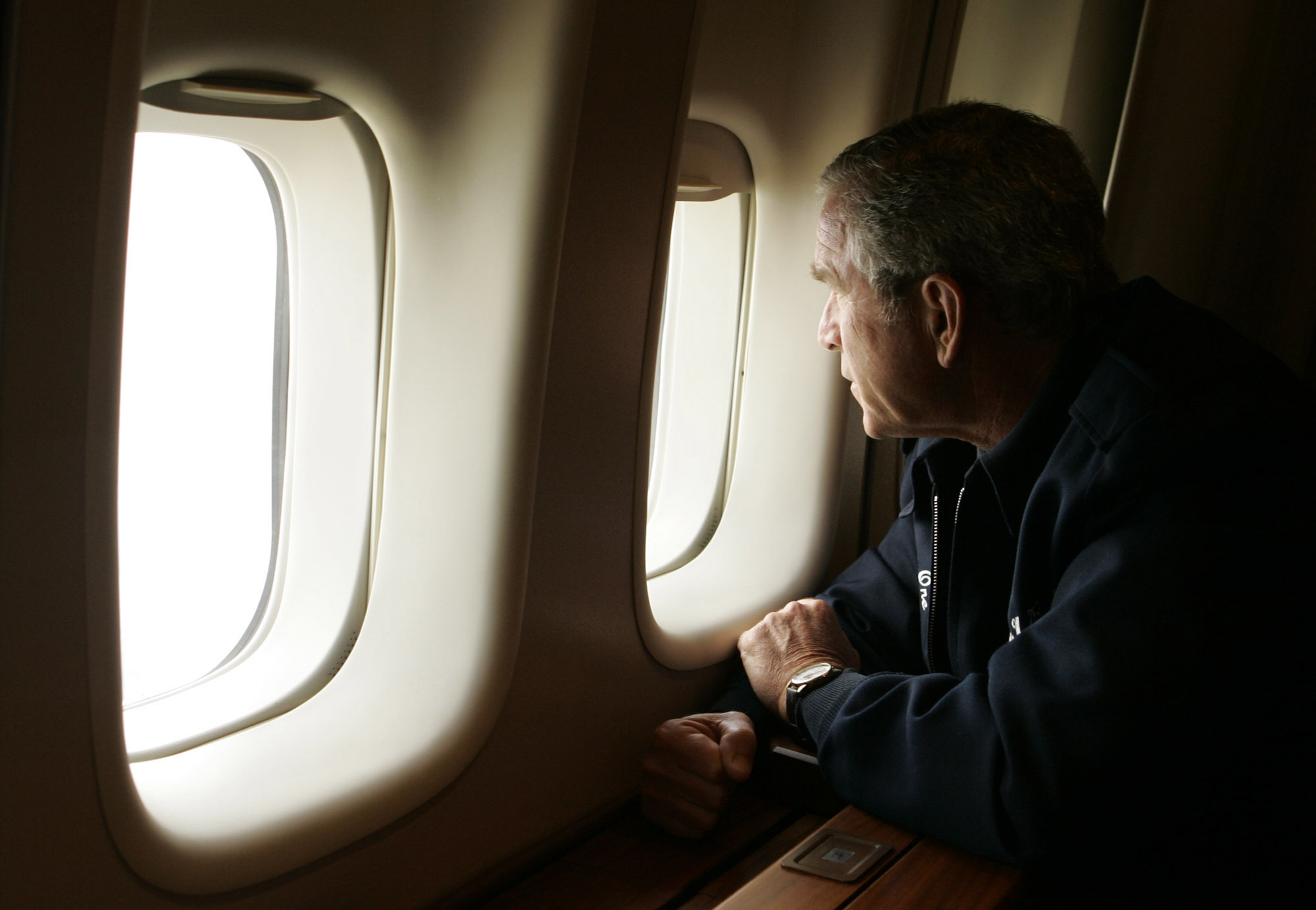 HURRICANE KATRINA
Bush on Air Force One on Aug. 31, 2005, two days after the storm hit, looking down on New Orleans. (AP photo)

Public support of Bush took a huge hit in 2005 because of his and his administration’s slow response to Hurricane Katrina in New Orleans. Katrina was a category five storm that made landfall on August 29th with one-hundred-seventy-five mile an hour winds. It breached levees, flooding most of the city, killing more than eighteen hundred people and leaving millions homeless. Americans looked on in horror as TV showed people on roofs of their homes waving their arms asking for help, bodies floating in the streets, a maddening scene at the Superdome. New Orleans is a majority-Black city and much of the disaster was in Black sections.

Bush had been at his Texas ranch for twenty-seven days when the storm hit. His earliest view of the devastation came on a fly-over on August 31 as he was on his way back to Washington. Pictures of him on Air Force One, looking down at New Orleans, made him appear detached and uncaring.

America went through its worse economic period since the great depression in Bush’s last two years in office, and the war expenses and lost revenue due to the tax cuts were contributing factors. The period was known as the “great recession.” It was marked by massive losses in home ownership and employment, with individuals and families discombobulated all over the country and severely in some areas. Many banks, including some of the nation’s largest financial institutions, were bailed out.

There also was a haughtiness.

One biographer, Jean Edward Smith, said in his 2016 book, titled Bush: “Rarely in the history of the United States has the nation been so ill-served as during the presidency of George W. Bush.’’ In a review of the book journalist David Shribman wrote:

The budget went from surplus to deficit; the country went from peace to war; military spending went from three percent of GDP to seven times that much. The man in charge was, Smith says, “[u]nprepared for the complexities of governing, with little executive experience and a glaring deficit in his attention span, untutored, untraveled, and unversed in the ways of the world.” And he left behind a country, Smith argues, “impoverished by debt, besieged by doubt, struggling with the aftereffects of the worst recession since the Great Depression, and deeply engaged in military conflicts of our own choosing.”

These are a few of the highlights of the George W. Bush era. There also were issues that Bush and his team neglected altogether, such as climate change and racial amends. (In those areas, Republicans aren’t the only ones who failed.)

Toward the end of his presidency and since then, Bush seems to have changed. He appears introspective, seldom speaks out on public affairs, doesn’t draw attention to himself. To me, he gives the impression of a character in a tragedy, some royal figure, saying, “What have I done?” But that may be reading too much into it.

In these Watergate at 50 pieces, I’ve put forward the view that much of the atrocious behavior by Republican leaders in the past half century – stretching the rules, cheating, lying, breaking the law, trying to manipulate public opinion and then disregarding it altogether – destroying democracy, that is – might have not have taken place if Richard Nixon had been prosecuted for his Watergate crimes.

As I’ve mentioned, we will never know for sure if this view is correct, it is hypothetical. Maybe nothing would have stopped Bush, Cheney and Rumsfeld from going to war on false pretenses, they seemed absolutely intent on it. On the other hand, had Nixon been dealt with in the legal justice system, his party might have taken a different, more straight-forward approach to campaigning and governing. And had that happened, perhaps a more experienced, accomplished person and not George W. Bush would have been the Republican candidate.

That is just conjecture, of course. But even if I am attributing too much to the failure to prosecute Nixon, the progression of events remains the same: Nixon and the subsequent Republican regimes left democracy behind. Their record after Watergate is dismal: ethics, the law and democracy mattered only when they wanted them to.

Next: The press then and now.