GINGRICH, THEN THE SUPREME COURT CONTINUED THE GOP DRIFT FROM DEMOCRACY

Not long after Iran-Contra, Newt Gingrich, a clever, eely hypocrite became a leader in the Republican move away from democracy. He ran a smashing Republican takeover of the House (and Senate) in 1994, one of the biggest swings ever, by popularizing what he called “a contract with America,” a pollster approved, sound-good, alleged legislative agenda based on the age-old maxim, “You can’t underestimate the American voter.”

Gingrich thrived on vicious personal attacks against opponents. He became speaker but in 1998 the Democrats regained five seats and Gingrich, about to be forced out of his position, resigned from Congress altogether.

In 2012 two leading observers of Congress, Norman Ornstein and Thomas Mann, published a book, It’s Even Worse Than It Looks: How the American Constitutional System Collided with the New Politics. They became among the first to say the Republican party was so extreme that it no longer was a serious political organization, and they gave Gingrich much of the blame. Ornstein and Mann’s views, so biting in 2012, sound like routine comments in the 2020s:

“Today’s Republican Party has little in common even with Ronald Reagan’s GOP, or with earlier versions that believed in government,” they wrote back then. “Instead, it has become ‘an insurgent outlier — ideologically extreme; contemptuous of the inherited social and economic policy regime; scornful of compromise; unpersuaded by conventional understanding of facts, evidence and science; and dismissive of the legitimacy of its political opposition’ . . . all but declaring war on the government.” That’s a description of a party that has left democracy behind.

After Gingrich, the year 2000 presidential election brought the Republicans a perfect storm, unlike anything that had ever happened in America – a successful coup by the Supreme Court to decide who would be president. The vote outcome that year hinged on the result in Florida, which was too close to call on election night. What followed were five weeks of maddening back-and-forth, advantage to Democrat Albert Gore one day and to Republican George W. Bush the next. 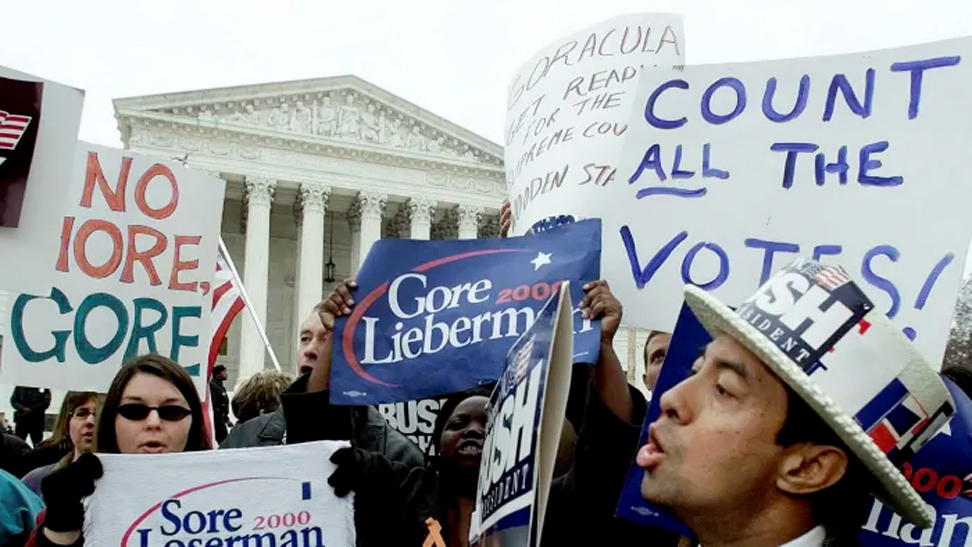 THE COURT PICKS A PRESIDENT
Supporters of Gore and Bush at the Supreme Court in December 2000. (Reuters photo)

For some people it was like Watergate at its most heated: they watched TV news day and night, got a newspaper fix the next morning, and then back to the TV news. Each day was crazier than the one before it.  In South Florida’s Palm Beach County, a Democratic stronghold, three thousand seven hundred and four people voted for a right-wing independent, Patrick Buchanan, many of them no doubt by mistake, thinking they were voting for Gore because of how the ballot was laid out. So Gore had more people intending to vote for him than did Bush, but intentions don’t count.

Some said Bush had extra help; his brother, Jeb Bush, was governor of Florida. A U.S. government commission later criticized Jeb Bush and Katherine Harris, the Florida secretary of State, for the election outcome, saying they allowed “widespread voter disenfranchisement,” in the thousands, far more than the tiny difference in the totals for Bush and Gore. Harris, as secretary of state, was in charge of the election in Florida; she also was co-chairperson of the Bush campaign there.

The day before Thanksgiving, white-shirted Bush supporters, some of them flown down from Washington and paid by the Republican National Committee, raided an office in Miami-Dade County during a vote recount. They yelled, kicked and shoved people, and their tactics succeeded in stopping the process. The Brooks Brothers riot, it was called.

One of those on the Republican legal team was the attorney John Roberts, the current U.S. chief justice. He was said to have gone to Florida for seven to ten days to assist the Republicans and to give advice to Jeb Bush on options for certifying the vote. When the Supreme Court intervened, Roberts helped George Bush’s attorneys prepare their arguments for the case. In 2005 after chief justice William Rehnquist died, Bush chose Roberts to replace him.

An article in the Miami Herald at the time noted that when “asked at his confirmation hearing about his views on Bush v. Gore, Roberts declined to comment, remarking, ‘Well, that’s an area where I’ve not been—I’ve not felt free to comment whether or not I agree…’”

Also among the future Supreme Court justices working on Gore v. Bush 2000 were Brett Kavanaugh, serving as a member of the GOP legal team, and Amy Coney Barrett, the third Justice appointed by Trump. At age twenty-eight, three years out of law school in 2000, she went to Florida to help on the Bush side. They and Roberts may have had legal talent but one would think their appointment to the bench, and subsequently to the Supreme Court, came because they had proven themselves loyal to the Republican party.

As weeks passed, no one was satisfied with the progress in Florida but things were slowly heading toward a resolution. On December 8, a month and a day after the vote, the Florida Supreme Court ordered a statewide hand-check of all so-called “undervote” and “overvote” ballots, looking for ones where the choice for president, if it existed, had not been included in the vote tabulation.

When the recount began, there were about one hundred seventy thousand such ballots to be examined with Bush ahead by a few hundred votes. Shortly after work started, the U.S. Supreme Court ordered it stopped and, in a five-to-four decision a few days later, gave Florida to Bush. That made a total of two hundred seventy-one electoral votes for him, one more than was needed, the closest presidential election ever.

Justice John Paul Stevens dissented from the ruling with a cry from the heart. “Although we may never know with complete certainty the identity of the winner of this year’s Presidential election, the identity of the loser is perfectly clear,” he wrote. “It is the Nation’s confidence in the judge as an impartial guardian of the rule of law.”

Afterward several news organizations hired the National Opinion Research Center (NORC) at the University of Chicago to do the recount that the Court had blocked. In November 2001 NORC, a highly regarded group, said that Gore had been the winner in Florida. There were four ways the vote could be measured, the report said, and Gore won on all four, by margins of sixty to one hundred seventy votes out of the more than five million, eight hundred thousand votes cast. The report was issued two months after the 9/11 bombings; it came and went with little notice. This Wikipedia piece is one of the few I found that includes NORC’s findings.

Thus, the George W. Bush presidency was illegitimate from the start, and it went downhill from there. One result was to move the high court further and further to the right. As president, Bush named two justices: John Roberts and Samuel Alito. Since Bush’s presidency was illegitimate, their appointments were as well. Also tainted later on were the appointments by Donald Trump of Neil Gorsuch and Amy Barrett and, many would say, Brett Kavanaugh. So, as the Watergate break-in’s fiftieth anniversary approaches, four or five of the six justices appointed by Republican presidents had no real right to be on the court in the first place.

Next: The illegitimate presidency of George W. Bush.