Race, the elephant in the smoke-filled room

The 1988 Willie Horton ad is to this day regarded as one of the most vicious ads in American presidential politics, a trend-setter for ugly campaigns ever since. When people ask, “Who let the dogs out that time?” the answer could be George H.W. Bush and Lee Atwater and Roger Ailes, two of Bush’s strategists who loved the Horton ad.

The ad was thirty seconds long. It showed a Black man, Horton, a convicted murderer who was allowed out of prison in Massachusetts on weekend furloughs. Horton didn’t go back after one of them and committed a vicious attack, raping a white woman and knifing and tying up her fiance. The ad linked Democratic presidential candidate Michael Dukakis, then governor of Massachusetts, to Horton because of his approval of the furlough program for serious offenders, not mentioning that similar programs, while coming under question, were common across the nation.

Dukakis was leading in polls when the ad was created. Atwater reportedly said, “If I can make Willie Horton a household name, we’ll win the election.” The ad ran only on cable TV but was so sensational that the networks showed it over and over as a news item, and Bush frequently referred to Horton during the campaign.

Atwater died of cancer in 1991. Near the end he apologized to Dukakis. In February 1991 he wrote in Life Magazine: “Fighting Dukakis, I said that I ‘would strip the bark off the little bastard’ and ‘make Willie Horton his running mate… I am sorry for both statements: the first for its naked cruelty, the second because it makes me sound racist, which I am not.″ 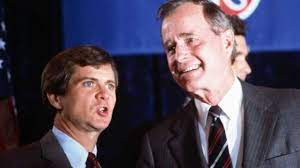 The ad was made by Bush supporters who said they were independent of his campaign, and, more specifically, by someone who had worked for Ailes from 1981 to 1987. Ailes, the top media adviser to Bush, denied any role in preparation of the ad but said at the time, “The only question is whether we depict Willie Horton with a knife in his hand or without it.”

Earlier Atwater had worked as an adviser to Ronald Reagan. He was said to be the person behind Reagan’s decision to open his 1980 presidential campaign at Philadelphia, Mississippi, the site of the brutal 1964 killings of James Chaney, a twenty-one-year-old Mississippi Black, and Andrew Goodman and Michael Schwerner, two New Yorkers in their twenties.

One of Ailes’s first ventures in politics was to assist in the 1968 Nixon campaign, after which he became an adviser to Nixon and later a strategist for Reagan. He was best known later in life as the leading force at Fox News, after Rupert Murdoch, helping create it in 1996 and serving as chairman and CEO until the year before his death in 2017. 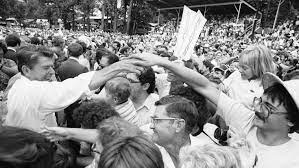 Reagan opens his 1980 presidential campaign on the fairgrounds in Philadelphia, Mississippi. (Neshobademocrat.com photo)

Nixon ran on law and order in 1968, which to many people’s ears meant harsh treatment of Blacks. Reagan endlessly attacked “welfare queens.” He didn’t mention race but people knew who he was talking about. Bush had Willie Horton. So Nixon and the first Republicans elected president after him, Reagan and the senior Bush, went out of their way to exploit racial division and fear as a campaign tactic, hiring as advisers men who were specialists in that.

There are many elements in individual political campaigns; these Republican presidents made sure that racist appeals to Whites were included in theirs. That despite the fact that while Americans had a lot on their minds in the seventies and eighties, racial grievances did not show up at all on most White people’s lists. If Americans had one main request of presidents during that period it would have been, no surprise, that they try to provide a decent, stable economy.

As for direct sentiment toward Blacks, NORC reported then that around seventy-five percent of Americans felt that either too little or about the right amount was being spent trying to improve their condition nationwide, leaving about twenty-five percent who said too much was being spent for that purpose. Was it among the latter group that law-and-order appeals, welfare queens and Willie Horton ads hit pay dirt for Nixon, Reagan and the senior Bush? I don’t know but it sure sounds reasonable. It is probably there that Hillary Clinton’s “basket of deplorables” was to be found later on and where many Trump die-hards still exist today.

The Reagan and Bush presidencies came just decades after the civil rights acts of the 1960s, not many years after Watergate and shortly after the Vietnam war. Life for Blacks was getting better, with educational and job opportunities opening up. It was, in retrospect, a very active moment in the progress of Blacks in America, a quiet revolution. In those years, women also were advancing in similar, unprecedented ways. Two revolutions at the same time, still developing today. The urban workplace especially was changing, and with it the make-up of people at shops, restaurants, hotels, entertainment sites, bars, theaters – wherever crowds congregated.

It was a period when what citizens mostly wanted from government was for it to deal with improving the quality of life in general. And in those transformative years, how exactly did Republican candidates for president respond?

They had other things in mind. They responded by taking advantage of White grievance where they could find it, just as they have been doing more recently. And they found then, as currently, that while most Americans were not receptive to such a message, there were some who seemed to be just waiting for it, looking for it, savoring it. A minority but with the potential to swing elections.

When Clinton made her “basket of deplorables” comments in the 2016 campaign she was criticized, partly on the grounds that what she said was insulting to people and also because candidates risk losing support when they start criticizing voters. But she could not have been more accurate. Speaking at a fundraiser that summer, this is part of what she said:

You know, to just be grossly generalistic, you could put half of Trump’s supporters into what I call the basket of deplorables. (Laughter/applause) Right? (Laughter/applause) They’re racist, sexist, homophobic, xenophobic, Islamophobic – you name it. And unfortunately, there are people like that. And he has lifted them up. He has given voice to their websites that used to only have 11,000 people – now have 11 million. He tweets and retweets their offensive hateful mean-spirited rhetoric. Now, some of those folks – they are irredeemable, but thankfully, they are not America.

…but that “other” basket of people are people who feel the government has let them down, the economy has let them down, nobody cares about them, nobody worries about what happens to their lives and their futures; and they’re just desperate for change. It doesn’t really even matter where it comes from. They don’t buy everything he says, but – he seems to hold out some hope that their lives will be different. They won’t wake up and see their jobs disappear, lose a kid to heroin, feel like they’re in a dead-end. Those are people we have to understand and empathize with as well.

I have to make a little admission at this point: I’m not sure that these reflections on race in American politics really fit among Watergate at 50 legacies. It was a Black security guard, Frank Wills, who first alerted DC police to the break-in but aside from that I don’t recall any Blacks involved in Watergate or any racial aspects to the scandal. So why bring up Willie Horton and all the rest? The answer is that I can’t imagine writing about American electoral politics and not getting into racial issues at least a little. Race has been and is the elephant in the room; it has grown more so over the years. Among Republicans all across the United States today it is not just White grievance that underlies racist politics, it is also voter suppression of Blacks on a massive scale, and the justice system itself. There was a time when at least some Republican candidates sought the Black vote. Not so much these days.

It is not clear that Nixon or Reagan or current Republicans share a dislike for Blacks or the view that Whites are superior but regardless, they and their party have cynically and endlessly used racism for political ends. And a recorded conversation between Nixon and Reagan and events afterward raise the question whether the two of them were racists personally as well.

In October 1971, a group of Tanzanians danced at the United Nations’ General Assembly, happy about a vote to seat a delegation from Beijing rather than Taiwan. Nixon was still in his first term as president, it was pre-Watergate, and Reagan, then governor of California, called him and used racist vulgarities to lament the Africans’ behavior: “Last night, I tell you, to watch that thing on television as I did…to see those, those monkeys from those African countries—damn them, they’re still uncomfortable wearing shoes!”

Nixon laughed, according to the White House tape of the conversation, and then repeated Reagan’s comments in two discussions with secretary of state William Rogers, referring to “these cannibals on television.”

Again, the people making these comments in private conversations were the president of the United States and the governor of California, later to be president.

In the year 2000, the National Archives made a tape of the Nixon-Reagan conversation public but, with Reagan still alive, didn’t include the racist remarks. The complete version was withheld until 2019 and then released at the request of a former director of the Nixon presidential library, Timothy Naftali, according to his account. So the full text of the two Republican presidents’ demeaning conversation was kept secret for almost fifty years.

Next: Gingrich, the politics of hate, and the Supreme Court chooses a president.