Iran-Contra, the presidential cover-up that succeeded

The first report of Iran-Contra appeared in a Lebanese magazine on November 3rd, 1986, a story saying the U.S. had sold arms to Iran. The sale was unlawful and news of it was a serious threat to President Reagan. The details ranged from hateful to embarrassing, prompting him to lie to the public repeatedly, to help plan and take part in a cover-up, and attracting a lot more coverage and congressional attention at the outset than Watergate did before the 1972 election.

After about one week of heavy news coverage, Reagan began a PR offensive, going on TV five times in nineteen days to try to persuade people there was less to the story than met the eye. Then came concerted Republican resistance, softness in the Democratic response, and a press that, mostly, accepted deceit, even obvious deceit, as legitimate explanations.

START OF THE COVER-UP?
Reagan and his attorney general Edwin Meese taking questions about Iran-Contra in November 1986. According to the special prosecutor, these two and others met in the situation room one day earlier to come up with a story. (AP photo)

Reagan was the first Republican elected president after Nixon. Had Nixon been prosecuted, as he should have been, I doubt that Iran-Contra would have happened. Reagan and those around him simply would not have undertaken their outlawed enterprises if such punishment for a misbehaving president was fresh in their memories. Instead, the Watergate lesson for Reagan and those around him was, why not?

The United States had sold thirty million dollars of arms to Iran, which was in the midst of a ten-year war with Iraq. By American law arms trade with any terrorist-backing nation such as Iran was forbidden. In return, Iran was to help get the release of five American hostages held by the Lebanese group Hezbollah. That also was touchy, as the stated U.S. position for years was that it would not negotiate for the release of hostages. Iran paid almost three times the going rate for the weapons, and part of the money went to the Contra rebels in Nicaragua despite Congressional legislation (the Boland amendment) that blocked the U.S. administration from legally funding the Contras either directly or indirectly.

All the while, the cover-up was taking shape. On November 24th, 1986, according to Walsh’s authoritative account, administration leaders met in the White House situation room and settled on a theme: make it appear as though Reagan hadn’t known of the arms sales even though he had personally approved them. The idea was to portray Reagan as a distant leader with rogue operators acting on their own. Oliver North of the National Security Council staff was the designated fall guy. Present at the meeting were Reagan, vice president George H.W. Bush, Attorney general Edwin Meese, the secretaries of state and defense, George Schultz and Caspar Weinberger, CIA director William Casey, national security adviser John Poindexter, and White House chief of staff Donald Regan.

Walsh called Meese “the architect” of the cover-up. (Meese never was charged with wrongdoing and went on to a long career in right-wing politics and think tanks. In 2019 Donald Trump awarded him a presidential medal of freedom.)

Some, like Schultz and Weinberger, didn’t like the plan but none of those present objected.    Then came months of obfuscation: Republicans on Capitol Hill in 1986 and 1987 were not about to allow a repeat of the Nixon experience. As a group, the Democrats, still the same soft party as during Watergate, never wanted to hurt Reagan very much and didn’t push hard.

The Tower Commission, given an early deadline and no subpoena power, issued its report on February 26, 1987. It said Reagan had “a lax managerial style and aloofness from policy detail,” just the conclusion those in the cover-up wanted. It was a slap on the wrist for the president while implicating North and others in wrongdoing. But the Tower Commission also reported, astoundingly, that in addition to selling weapons to Iran, the U.S. was aiding Iraq, supplying ingredients for nerve gas, mustard gas and other chemical weapons. That was not only unlawful but shameful and immoral, even unfathomable.

Walsh spent nearly seven years investigating Iran-Contra. He concluded that Secretary of State Schultz either deliberately lied or had lapses of memory in congressional testimony, and that Secretary of Defense Weinberger perjured himself. Vice president George H. W. Bush said repeatedly he was “out of the loop” – a lie (or at minimum a misleading statement) that he maintained as he won the presidency in 1988 but that caught up with him before his loss four years later to Bill Clinton. After his defeat but before leaving office, Bush handed out pardons to five figures in the plot, so that the full story would never come out.

One person, Walsh, emerged with honor from Iran-contra. His probe led to indictments of Weinberger, former national security adviser Robert McFarlane, Poindexter, national security staff member North, four CIA officials, an assistant secretary of state, and three other people. Not indicted but investigated and implicated were Schultz, CIA director Casey and acting CIA director Robert Gates. Reagan himself was deposed by Walsh in 1990, saying eighty-eight times that he couldn’t remember something. 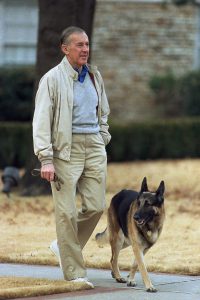 THE PROSECUTOR Lawrence Walsh in December 1986 as he was named Iran-Contra special prosecutor. Reagan “was in range of impeachment” for what he did, Walsh was to state later on. (AP photo)

Walsh was a lifelong Republican, a highly respected judge and lawyer, at one time the president of the American Bar Association, and even as he was investigating Iran-Contra he professed admiration for Reagan. Nevertheless, Walsh wrote a five hundred-plus page book, Firewall, published in 1997 when he was eighty-five years old, that built a case against Reagan and the others that is so strong it can never be torn down. On page one he wrote, “Reagan was within range of impeachment for his secret authorization of the sale of American weapons to Iran in exchange for American hostages.” So much for Reagan’s denials.

The book concludes with this: “What set Iran-contra apart from previous scandals was the fact that a cover-up engineered in the White House of one president and completed by his successor prevented the rule of law from being applied to the perpetrators of criminal activity of constitutional dimension.” Unlike Watergate, that is, Reagan’s Iran-contra cover-up succeeded, and the crimes were very serious. Two presidents in one cover-up.

North and Poindexter were prosecuted and convicted of obstructing Congress and other felonies. But appeals court panels, in two-to-one votes, threw out the convictions on very shaky grounds. In both cases, one of the judges was David Sentelle, a powerful behind-the scenes right-wing force.

Later, in 1994, Sentelle, who had taken over a lead role in selecting special prosecutors,  removed the independent counsel in the Bill Clinton Whitewater investigation as it was winding down and replaced him with Kenneth Starr, who turned a dying corruption inquiry into a sex case. Thus, without Sentelle there would have been no impeachment of Clinton. I don’t know whom Hillary Clinton was speaking of when she talked about a vast right-wing conspiracy but Sentelle comes to mind. Americans can look back with pride on the courts in Watergate, with Judge John Sirica and the Supreme Court playing important, independent roles. Not so in Iran-contra.

On a personal note: For some years toward the end of his life I was friendly with George MacKinnon, at the time an ex officio appeals court judge who was in charge of selecting special counsels before Sentelle took over. MacKinnon appointed Walsh and the original Clinton special counsel as well. He told me he knew Kenneth Starr and could have chosen him as a special prosecutor over the years but didn’t “because he is a weak person.”

To repeat: In my view, Iran-contra probably would not have happened had Nixon been prosecuted. Instead the Watergate lesson for Reagan was: not to worry, the president can get away with anything. According to Walsh, Reagan even made jokes about the lawlessness of Iran-Contra, saying that if he went to jail, “visiting hours are Thursday.” Thus, at that point in American history – the early 1990s – it no longer was just Nixon who had escaped the criminal justice system, it also was Reagan, the senior Bush, and those Bush had pardoned. Perfidy building on perfidy. The GOP was getting deeper into its move away from democratic government.

Next: The Republicans and racism.