‘If the government becomes a lawbreaker, it breeds contempt for the law’

Republican presidents and other leaders after Nixon quit on democracy, sometimes criminally, straight on through to the Donald Trump era. This segment of Watergate at 50 is the first of several describing how we got here.

Helping spur them on, I believe, were the refusal by special prosecutor Leon Jaworski to indict Nixon in 1974 and Gerald Ford’s pardon of him. There is no absolute certainty that Republican presidents would have shown restraint had Nixon been indicted; it can’t be proven or disproven. But dropping Nixon into the legal justice system obviously would have been a very strong caution to them, at the least. Also, of course, prosecuting Nixon would have been the correct thing to do, for if democracy is to succeed, people in the highest positions must be held accountable. Justice Brandeis’s words in the Olmstead case in 1928 – “If the government becomes a lawbreaker, it breeds contempt for the law…it invites anarchy” – are a powerful reminder of basic principles.

The case against Nixon was open and shut, his criminal behavior caught on tape. He designed and ordered the Watergate cover-up to begin with, turned chiefs of the CIA and Justice Department into criminal abettors, ordered hush money payments to Watergate felons, tried to bribe a federal judge in the Daniel Ellsberg case, sought revenge on the press – and lied over and over to the American people. All that was known when he resigned, much of it described in my book, The Great Coverup.

Not so widely known was how narrowly Nixon escaped indictment. Almost all the Watergate prosecutors wanted to issue criminal charges against him. So did the Watergate grand jury. In early 1974, in a straw vote, the nineteen grand jurors present raised their hands to support indictment, some holding up two hands. On February 1 of that year, the Watergate prosecution team wrote six pages of criminal charges against Nixon for bribery, conspiracy, obstruction of justice and obstruction of a criminal investigation. But Jaworski, the special prosecutor appointed after Archibald Cox was fired, blocked indictment. He did so despite Nixon’s clear guilt.

As recently as 2019 the foreman of the original Nixon grand jury looked back in regret, saying to a Washington Post reporter, “I thought with all the evidence that we had, there was enough for indicting Nixon…It was in a sense a disappointment that justice didn’t run its course.”

There is “airtight evidence of criminality against the president,” attorney Jill Wine Banks wrote in her 2020 book, Watergate Girl. Banks said there was “a ferocious battle of wills,” one “pitting the aging special prosecutor against many of his youthful staff.” Also, according to Banks, who was a member of that staff, he did so despite “a one hundred twenty-eight-page document drawn up by Philip Locovara, counsel to the special prosecutor, detailing Nixon’s criminal culpability.”

Banks wrote that Jaworski agreed that Nixon had violated federal law but felt “it was improper and irresponsible to indict a sitting president because the law in this regard had never been tested, and the nation would suffer devastating trauma while the complicated legal issues were sorted out.” Banks doesn’t buy any of this, writing, “I wonder what Archie Cox would have advised. There’s no wording in the Constitution that says a sitting president can’t be indicted.” 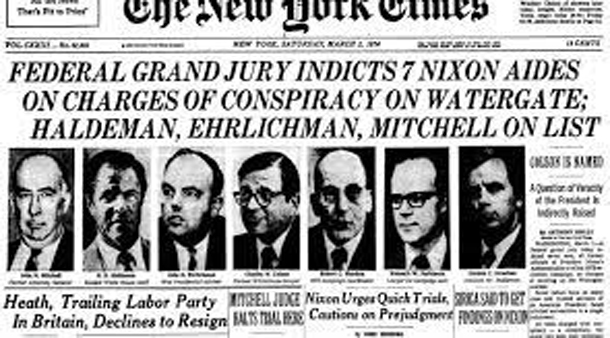 The grand jury wanted to charge Nixon as well and prosecutors drew up an indictment. But special counsel Leon Jaworski blocked it. Did that decision help lead to today’s jeopardy for American democracy?

I also don’t buy it. Nixon either knew what he was getting when Jaworski was chosen or he was just plain lucky. Indictment and prosecution of Nixon surely would have brought about national trauma, but for many Americans it also might have been a unifying event. Long before the scandal, Nixon was untrusted, not very popular, called Tricky Dick, his picture on posters that said, “Would you buy a used car from this man?” Putting him in handcuffs could have brought some cleansing, a catharsis, a warning to future leaders. Imagine him convicted, serving time.

Instead, failure to indict him and Ford’s pardon edged America into decades of devastating, growing national trauma anyway. The pardon was a cynical, deliberate assault on American public opinion and recognized as one. In one of Ford’s first comments about a possible pardon he made it appear that he would be doing what the citizenry wanted. Ford said he subscribed to what he called the “point of view of the American people” that Nixon should not “be drawn and quartered.” Five days after he made those remarks a Gallup poll showed that by fifty-six percent to thirty-seven percent, the public felt Nixon should “be tried for possible criminal charges arising from Watergate.”

A few days after that, Ford issued the pardon. As he did, he said, “I cannot rely on public opinion to tell me what is right.”

In June 1975, Nixon opened himself up to possible criminal charges despite the pardon by testifying about Watergate before a grand jury for eleven hours over two days in a special session in California. The terms were that Nixon could not be prosecuted for anything he said as long as it was truthful, but he was not protected for perjury. It was the first time an American president had ever gone before a grand jury.

Ford’s approval ratings plummeted after the pardon and he never recovered. He lost the 1976 election, narrowly, to Democrat Jimmy Carter, an insurgent who had little backing and much opposition in his own party’s leadership. It was one of the closest elections in American history.

Carter, an idealist, had some extraordinary accomplishments, especially the Camp David accords between Israel and Egypt, which brought years of peace to that part of the Middle East. More than previous presidents, Carter made human rights demands a part of his foreign policy, welcomed Blacks, women and Hispanics in government leadership, established a national energy plan.

But as an outsider he was savaged by Republicans, Democrats, and the press and by events beyond anyone’s control. An oil crisis in 1979, the second of the decade, created enormous gas shortages, impossibly long lines, even riots, at gas stations. Inflation soared and interest rates were the highest in a lifetime. On top of all that, on November 4th, 1979, radical, angry Iranians seized the U.S. embassy in Tehran, took fifty-two hostages and held them for the last fourteen months of Carter’s presidency. He tried a rescue attempt with commandos in two helicopters that failed miserably, never getting near Tehran.

In 1980, Sen. Ted Kennedy tried to take the Democratic presidential nomination in a bitter intra-party fight. Carter swatted Kennedy off and seemed to be doing well enough against his Republican opponent, Ronald Reagan, until the end of the campaign. But Election Day, November 4th, came on the one-year anniversary of the hostage taking – and for a full week before the vote the hostage situation dominated the TV news, damaging Carter. In addition, Reagan had broadened his appeal, reducing concerns about whether he was too conservative. He pulled ahead the last few days and won going away.

Ford may have offended and insulted Americans with the Nixon pardon, but Reagan’s scandal, Iran-Contra, flat-out broke the law. In some ways, especially in its successful cover-up, it was worse than Watergate.

Next: Iran-Contra, a White House criminal deal and a years-long, successful cover-up by two presidents.